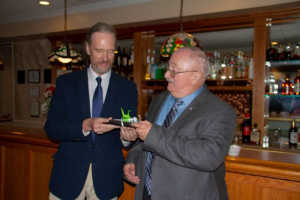 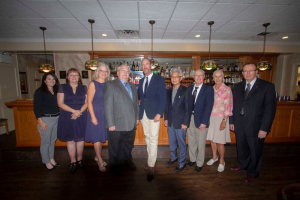 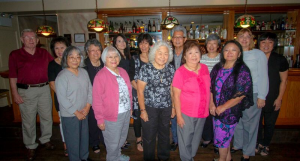 Peterson was the second recipient of the John Fuyuume Citizenship Award, created to honor the memory of SECC co-founder John Fuyuume who passed away in 2016. Upon the passing of Fuyuume, Peterson was quoted as saying that Fuyumme “He was one of the finest men I have ever met in my life.”

Together, Fuyuume and Peterson partnered in the governance of SECC, with Peterson assuming the role of president upon the passing of SECC co-founder, Ellen Nakamura, but in actuality Peterson functioned as an honorary chairman of SECC from its inception, many years prior to the opening of the Center in 1994. Peterson, was honored for his noted service as president from 2000 through 2018, during time of transition and growth.

Upper Deerfield Township Deputy Mayor John “Terry” O’Neill started the program with words of greeting and appreciation from Mayor James Crilley. O’Neill and Seabrook recognized the volunteers who operate the Center, their dedication and continued service of sharing the unique history of Seabrook, a melting pot where people of different races and heritages were given an opportunity for a new start in life at Seabrook Farms.

The Center is located in the lower level of the Upper Deerfield Township Municipal Building, Highway 77, Seabrook, NJ and open Monday through Thursday, from 9AM to noon