I was only three when we arrived in Seabrook in 1945. It was a great place for us kids to grow up. We had the nursery school playground behind our apartment. We played marbles there…remember “knuckles-down” and “no fudging?” Playing marbles was our earliest introduction to gambling because whatever you won, you got to keep. When we started going to school, we had more grown-up games to play like “jin-tori” (a version of capture-the-flag), “kick-the-can,” “over, over Red Rover,” “sink-the-battleship,” “chicken fight,” “splits” played with a pen-knife, “Estonian dodge-ball.” We didn’t start playing baseball, basketball and football until we were around 8 years old.

I remember Mr. Dick Kunishima (Rick and Randy’s father) taught us the game of baseball. He was a tough coach but he taught us well. Many of the more talented guys became really good ballplayers due to his coaching. We played basketball on the school ground and football on the front lawn of Seabrook School when we could. Mr. Miller, the school’s head custodian, would always chase us off the front lawn and threaten to call the police. When we didn’t see his pickup truck parked by the school, we would play football. As we played, we would keep an eye out for his pickup coming down Highway 77. When someone saw it we would all scatter. He never did catch any of us but he sure messed up many of our games. 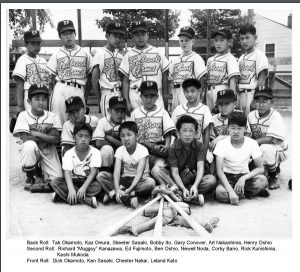 I remember when a new Japanese-American kid our age came to Seabrook around 1953. We were having a sandlot baseball game on the school ground and this new kid stood over on the first base side with his baseball glove and cap on, just standing there and watching. After a while one of the guys asked if he wanted to play, and he said yes. He was placed on the team that was short a player or two. Man, were we surprised that he could actually play baseball. He knew the rules. He could catch the ball. He could throw the ball. So, this new kid was quickly accepted by all of us. Looking back I can see how brave this little kid was to approach all of us who he didn’t know. baseball teamWe asked what his name was and where he came from and all of that. He said his name was Richard Kanazawa. He soon became a fixture in all of our games. It didn’t hurt that he could play pretty well, too. He also had a glove because at that time many of us had to exchange gloves each half-inning because we did not have gloves of our own. We started calling him “Muggsy” but I don’t know where that came from or who first started calling him that. That name stuck with him, at least with the Seabrook guys. To us he will always be Muggsy.